Kevan has now received a further response from the Foreign and Commonwealth Office to his letter regarding constituents who are unable to make their way home to the UK from overseas.

“I am aware of a significant number of constituents who are struggling to return to this country as airlines suspend or cancel services.  The advice I have received from the Foreign Office is very sketchy, and fails to capture the urgency of this situation.

“The government announced on Monday that they will take steps to assist UK citizens in these unprecedented circumstances, but my constituents and I are still waiting for this to translate in to action on the ground.  Other countries are doing whatever it takes to get people home, and the UK government should be doing the same.

“I share the concerns of my parliamentary colleague Emily Thornberry, who has written a detailed letter to the government calling on them to sort out the details of the scheme, and get things moving.

“I will continue to press on this issue, until all my constituents are safely home again.”

Kevan challenged the Foreign Secretary in Parliament yesterday over the poor level of support the Government are providing to help British Citizens who are stranded in other countries.

This was following  contact from a number of Kevan’s constituents about their situation and and led to him calling on the Foreign Office to put measures in place to ensure that cases raised by MPs can be acted upon quickly to get people home.

“The Government now need to charter aircraft or call in the Military to fly these people home. It is no good relying on an ever-decreasing commercial network. Without this action, vulnerable people will be stranded and loved ones at home will be rightly worried and concerned about their family members.”

Today, Kevan has followed this up by writing to the Foreign Secretary and the Defence Secretary, and a copy of his letter is included below: 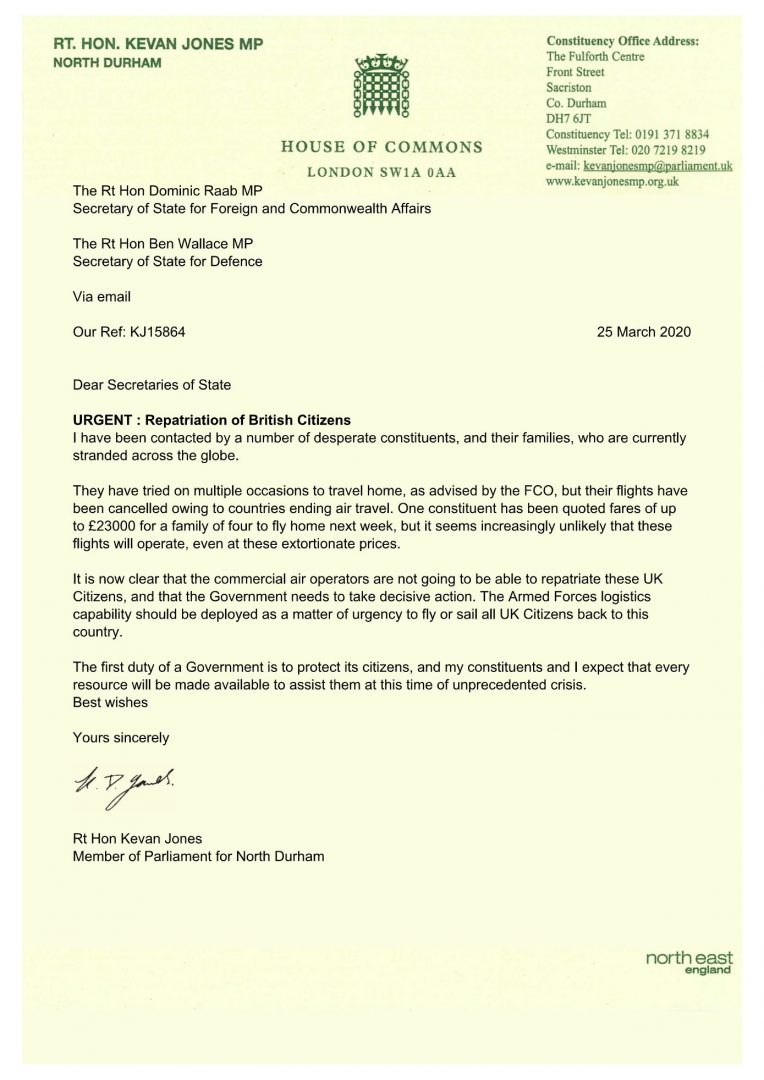 The full exchange in the Chamber yesterday is contained in the video below: