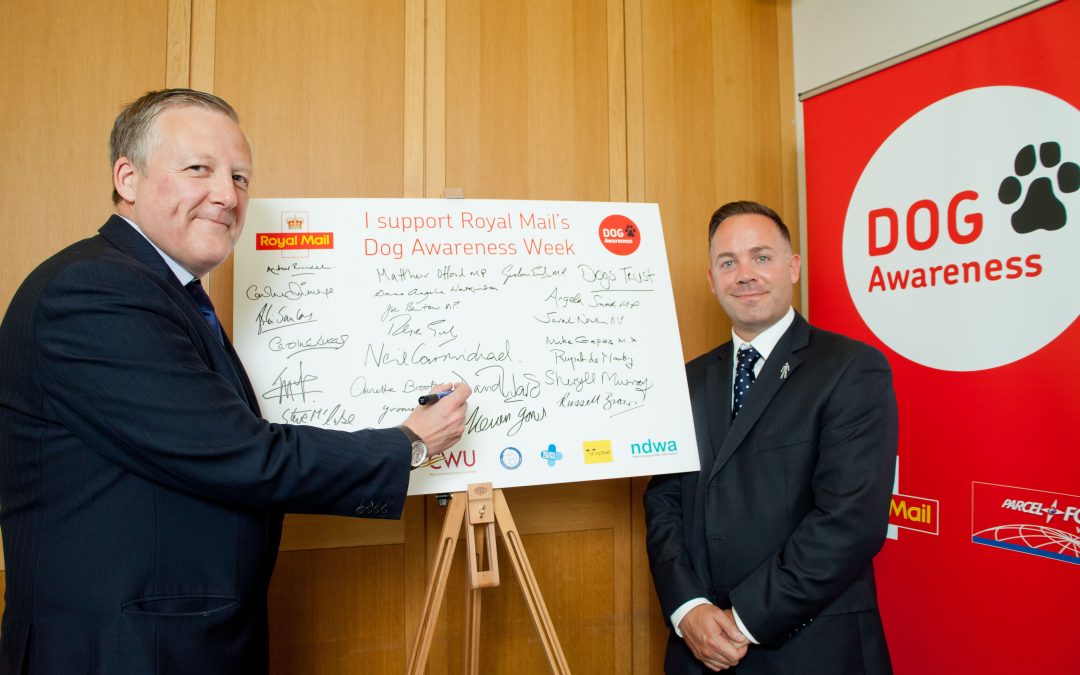 Kevan Jones MP for North Durham attended a drop-in session at Westminster, supported by Battersea Dogs & Cats Home and Dogs Trust, with Royal Mail Group Director of Safety, Health, Wellbeing and Sustainability, Shaun Davis. Around 70 MPs attended and the session provided them with advice on how to react around dogs when out in their local areas.

This forms part of Royal Mail’s wider campaign to reduce the number of dog attacks on postal workers and to encourage responsible dog ownership during Dog Awareness Week which runs to the 4 July. However, postal workers are not alone in facing the risk of being attacked by a dog while carrying out their jobs. Politicians and volunteers may also encounter dogs when out canvassing and leafleting in their local areas.

Kevan Jones MP is working with Royal Mail in encouraging dogs owners to play their part in reducing the number of incidents.

Kevan has been out with a postman on his round, and has seen just how big a problem this can pose and is concerned for the welfare of the people in his constituency.

Kevan Jones MP said; “I am pleased to have attended the session at Westminster where I learned and shared tips on how to protect myself and my colleagues from dog attacks when out canvassing in North Durham.

“Dog attacks are a significant issue faced by postal workers, members of the public and indeed by myself and my colleagues when out leafleting. Royal Mail, CWU, Battersea Dogs & Cats Home and Dogs Trust are doing a fantastic job promoting responsible dog ownership and I fully support this important campaign”.

There were 33 attacks recorded across the North Durham constituency from April 2013 to April 2014.

Royal Mail has published the results of a survey of MPs and Assembly Members about their personal experiences of being bitten by a dog.

The survey found that politicians face similar risks of being attacked by a dog to postal workers when out canvassing or delivering leaflets. Just over half of the near-50 respondents revealed they had an incident with a dog.

Dog attacks on the rise

Dog attacks are a significant hazard faced by postmen and women on a daily basis. On average around nine postmen and women a day are attacked by dogs across the UK with over 3,300 attacks taking place from April 2013 to April 2014, some leading to a permanent disabling injury. The number of attacks has risen by 8 per cent nationally since 2012*.

The campaign is being held in partnership with the Communication Workers Union (CWU) and has received support from a wide range of organisations and animal charities. This includes Battersea Dogs & Cats Home, Dogs Trust, Blue Cross, National Animal Welfare Trust and the National Dog Warden Association.

“As we’ve seen from our survey, postal workers are not alone in facing dog attacks – politicians experience the same risk of being bitten by a dog every time they canvass or deliver a leaflet through someone’s door. Nobody should face this hazard whilst simply trying to do their job.

“Our first priority as an employer is to ensure the welfare and safety of our people who provide a valuable service to our customers. We appeal to owners to keep their pets under control, especially if they know their pets have a territorial nature. It can also be simple things that help – for example just making sure the dog is kept inside when the postman calls.”