Kevan writes to the Home Secretary on Police Recruitment

Today, I wrote to the Home Secretary calling on her to consider the role of former armed services personnel in the police.

As my letter outlines, whilst the Government’s decision to seek to make the Police a ‘graduate profession’ is supported by the College of Policing, I remain deeply concerned that these changes will discourage veterans from applying to be police constables.

I believe that former members of the armed forces currently offer so much to police forces up and down the country, none more so than in our own constabulary. Many skills commensurate with high-quality police constable work are transferable from military professions, the most notable of which is experience controlling and operating in volatile environments, as well as having a deep and proven sense of public duty.

Veterans represent the most steadfast and dedicated public servants. Without their experience, it is my concern that the capabilities of the police will suffer accordingly.

You can find the full text of the letter here:

May I firstly congratulate you on your appointment as Home Secretary.

I write to you regarding the proposed changes to recruitment in the Police Force, which seeks to make policing a ‘graduation profession.’

Whilst I understand these reforms have the support of the College of Policing, I remain deeply concerned that the requirement for the police to institute and maintain the Police Constable Degree Apprenticeship, at a time of severe financial constraint, will discourage many forces from recruiting non-degree graduates.

From my own area of County Durham, I have observed the importance of non-graduate police officers entering the profession and must state that the expected downturn in the number of non-graduates applying for police roles will result in many forces being less diverse, less representative of the areas they police, and less capable of fulfilling their statutory duties.

As a former Defence Minister, I am particularly concerned that the Government’s proposals will deter applications from non-graduate, former members of armed forces. Through my experience in office, I observed first-hand the unique skills that former members of the armed forces bring to individual police forces up and down the country. Many skills commensurate with high-quality police constable work are transferable from military professions, the most notable of which is an experience of controlling and operating in volatile and high-pressure situations, as well as having a deep sense of public duty to protect the public.

I fear therefore that any measure which may potentially discriminate against this demographic will weaken the capabilities of the police nationally.

According to Lincolnshire Police, by extending the probationary period, apprentices would effectively be paid an apprenticeship wage for 3 years. Whilst this may not discourage a younger person from applying, I fear that, for a former member of the armed forces who are likely to be older and may have dependents, this may be an impediment to applying to the Police Force.

Similarly, the likely rates of attrition through the period of training will further deter former military personnel. Whilst it is unclear what levels of attrition can be expected from the Police Constable Degree Apprenticeship, the closest comparison we have, that of the nursing apprenticeship, currently suffers a rate of 25%. It is my concern that similar levels of attrition in the Police Constable Degree Apprenticeship will not only encourage individual police forces from supporting the scheme, but will discourage non-graduate candidates, such as former armed forces personnel, from applying.

Former armed forces personnel represent the most steadfast, dedicated public servants, yet they must of course consider financial expediency when making decisions about their employment once they leave the military. It is my concern that the prospect of a lower-wage and an extended probation period, combined with the confronting of new qualifications will deter some of the most capable prospective candidates from entering our Police Force. 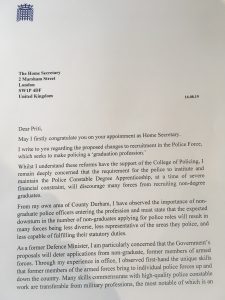 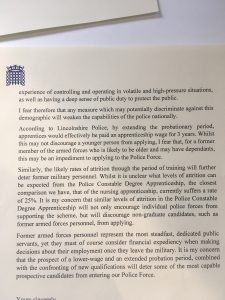