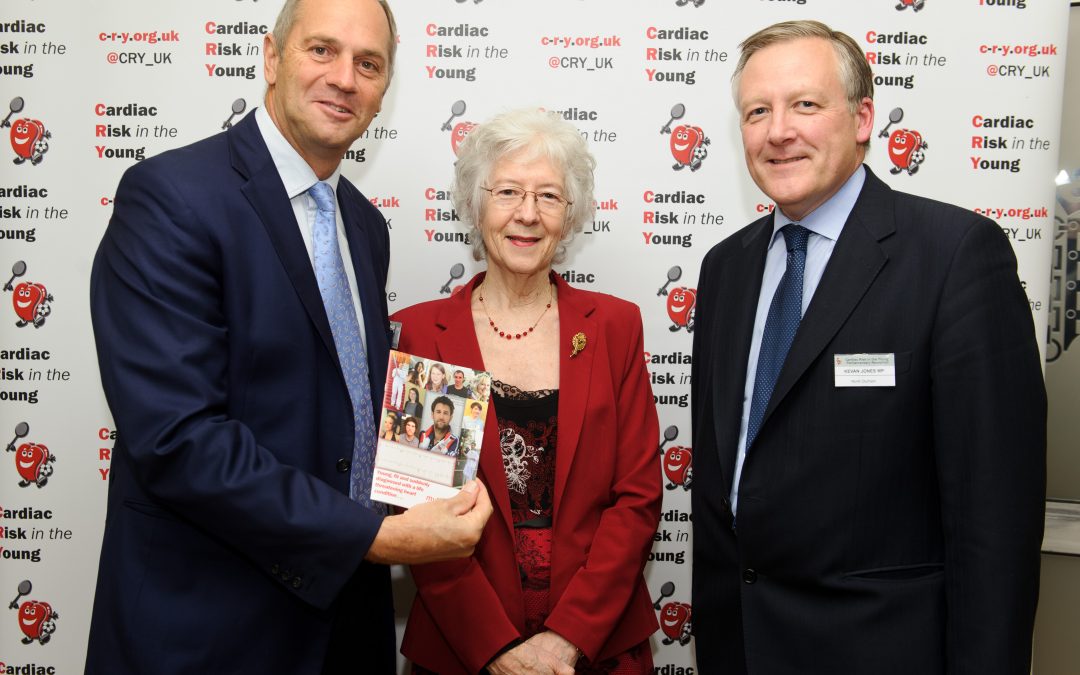 Kevan Jones MP joined the national charity, Cardiac Risk in the Young (CRY) at a high profile parliamentary reception last night [27 November 2013] as it launched an inspiring new resource for young people who have been diagnosed with a ‘hidden’ yet potentially fatal heart condition.

The new book, “Young, fit and suddenly diagnosed with a life threatening condition…”, features 10 personal ‘essays’ from young men and women (all members of the charity’s myheart network) who recount their own experience of being diagnosed. It also includes an introduction from double Olympic gold medalist, Tom James, who was identified (by CRY’s consultant cardiologist, Professor Sanjay Sharma) with a heart condition known as Atrial Fibrillation in the run up to the London 2012 Games.

CRY is well known for the support it offers to hundreds of tragically bereaved families, who have been affected by young, sudden cardiac death. However, this latest campaign highlights the work it also does with the growing numbers of young people who – thanks to greater awareness and early diagnosis – are coping a shock diagnosis of a potentially fatal heart condition.

The facts sound terrifying – but the reality is thankfully a different story, due to the increasingly effective treatments and intervention and an ever-developing understanding about the genetics behind many of these conditions.

Yet, as this new booklet explains, despite the reassurances from expert doctors, friends and family, such a diagnosis can still have devastating effect on these “apparently fit and healthy” young people.

Chief Executive and Founder of CRY, Alison Cox MBE, says; “Since CRY was first established in 1995, much of my time – both as a CEO and as a trained counsellor – has been dedicated to supporting bereaved families. However, as the charity evolved, it became clear that there was another group of people also desperately in need of support – but in a different way.

“A diagnosis of one of these conditions that can – and does – kill at least 12 young people every week in the UK, is incredibly frightening. These young people desperately need the reassurance that their lives are not over – in fact, in some cases, following successful treatment, they are only just beginning. But often, the only person who can convincingly offer that reassurance is someone who is going through the same experience as themselves.”

CRY’s myheart network has been exclusively developed to provide support and information to these young people and their families, who have been diagnosed with a heart condition; who are recovering from heart surgery or who are living with a pacemaker or ICD (implantable cardioverter defibrillator).

James Bailey (21), first became involved with CRY following his ‘shock’ diagnosis with a hidden syndrome known as Wolff-Parkinson-White. He says; “So many of my friends from the myheart network have lost siblings and parents. Maybe that’s why they’re so determined to live life to the full. They’ve done amazing things since becoming involved with CRY; spoken in Parliament, carried the Olympic torch even been asked to ‘toss the coin’ at the start of the Wimbledon men’s final! But perhaps more importantly, is the fact we’ve all met each other and will always be there for support.”

Kevan Jones MP concludes; “I was delighted to attend the launch of CRY’s new booklet and would like to congratulate the charity for the work it continues to do in supporting young people whose lives might otherwise been turned upside down by such a sudden diagnosis.”