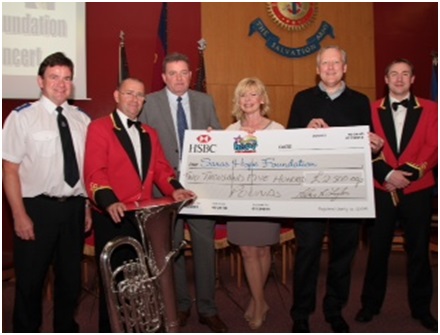 The Foundation runs a holiday retreat in Crete in honour of Sara Hoburn who lost her battle against cancer aged 16. In an effort to raise funds, the Durham Miners Association Brass Band offered their services for a charity concert in conjunction with Agape, who also performed. The Salvation Army very kindly hosted the event at the Citadel in Chester-le-Street.

Mr. Jones said, “I am very pleased to be able to show my support for this excellent cause and would like to congratulate all involved in making the evening such a success.”

Councillor Smith said, “It was a lovely evening and an amazing £2500 has been raised.”

Alan Taylor from the Durham Miners Association Brass Band, who organised the event, added, “This fundraising event brought together a lot of organisations in the Chester le Street area for a very worthy cause and I wish to thank all who supported it.”